Bromance in the air Sholay

Bromance in the air Sholay

Bromance in the air Sholay
“Sholay is no longer just a film, it’s an event,” noted film critic Anupama Chopra. We believe the movie is a bit more than a great film. Sholay is the film. It’s been 36 years since the release and almost everyone’s watched it a dozen times. But we still love to go back to it. Its millionth re-run on TV still hooks us. 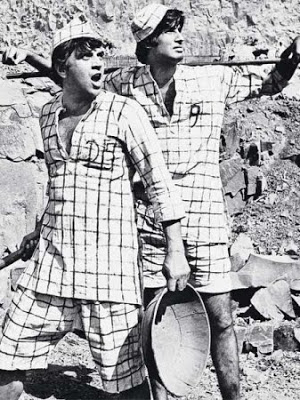 The reason is, all that we’ve come to expect of commercial films, Sholay has it. The drama, the romance, the bromance, the action, the laughs and the music. Every  aspect of the film is top of the class. Sholay brought a whole new genre to Hindi cinema. Westerns were an American legend but Ramesh Sippy adapted it to the Indian setting with great efficiency. A hundred movies tried to ape it through the ’80s and ’90s but none managed even two star reviews. Sholay remains one of its kind. We’ll continue to feed off it. This is as epic as it gets.