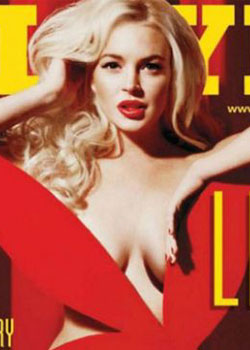 Playboy magazine has released the first shot of Lindsay Lohan from the inside spread after the cover of the highly anticipated issue was leaked on the internet earlier.

The 25-year-old actor is seen channeling her inner bombshell as she reclines with her white blonde hair tumbling over her shoulders, her arm raised above her head. With her red glossy lips parted, Lohan is seen pouting and staring into the camera with her eyes partially hidden under her huge eyelashes.

Fans of the magazine will no doubt feel short changed by the “nude shot” which reveals only a hint of her chest.

While plenty of flesh is on show, it seems that her skin has been airbrushed considerably in parts with few freckles on show, the Daily Mail reported.

A snap showing Lindsay on the set of the photoshoot was revealed on Nov 11.

The ‘Mean Girls’ star was captured before the airbrush, clutching a cigarette and teasing onlookers as her dressing gown gaped open.