Movie Review: Rock Ba-Casba is a full form Knock Out

Movie Review: Rock Ba-Casba is a full form Knock Out 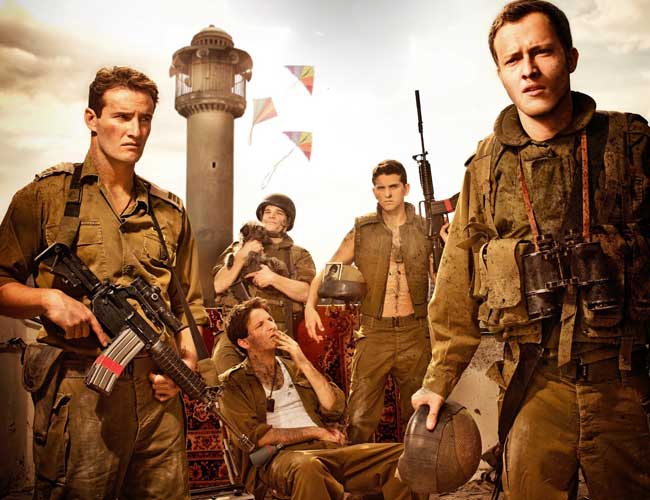 The film is set in the Gaza Strip circa 1989, At the height of the first Intifada, It illustrates the futility of the Israeli-Palestinian conflict. A company of raw young recruits reports for duty in Gaza, where a macho commander (Angel Bonanni) and a grizzled officer of a higher rank remind them of the rules of engagement. Their assignment is to restore order by quashing any obvious sign of rebellion they see while policing the streets.

As soon as they start their patrol, They run into a group of rock-throwing youths who also misbehaves with them. A washing machine pushed from the top of a building kills one of the soldiers. The culprit escapes and the commander taps four of the others for surveillance duty on the rooftop of the building from where the washing machine was pushed. This entire scary episode proves distressing to the troops and even more so to the aggrieved Palestinian family that lives in the building below.

The film does have it's controversial and discussing moments, But once you are flowing with the script, You deeply get involved with the execution of the characters. The film mainly focuses on the characters who are on the rooftop. And of course the family in the house. Some may find the lines very disturbing in the film.

This first feature from helmer Yariv Horowitz. Let me admit Rock Ba-Casba is impressive in terms of generating tension and intensity. The film also goes emotional on the parts where it is deserved. A woman searching for her son while the soldiers get back at their barrack, The father of the dead soldier comes to see the spot where his son was killed mercilessly are very well shot and explained.

The climax where Tomer finally recognizes and kills the culprit is awesomely executed. According to me, Tomer's character is pure gem "Human" who would have let-go the culprit. But the culprit refuses to go and stands in front of Tomer with a winning smile. I think this made Tomer fire his shots. The final scene which depicts Tomer's company pulling out and new recruits marching in to take their place, Projects the conflict is an endless cycle which will go on.

Ever actor has performed his part with skilful finesse. But the film all the way belongs to Yon Tumarkin. What an amazing performance, I must say. The Camera Work, Editing (93 Minutes), Production Values (Despite shot on HD) and Musical Score are fantastic.

Rock Ba-Casba is an full form Knock Out that should not be missed at any cost.